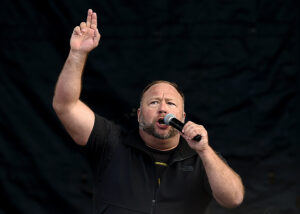 This morning sentient shitpost Alex Jones filed for Chapter 11 bankruptcy protection in Houston, citing the $1.5 billion in jury awards to families harmed by his lies about Sandy Hook as his biggest debts. The move marks the third time this year that the rightwing media figure sought the protection of the bankruptcy court, making him a well known quantity to US Bankruptcy Judge Christopher Lopez, who had the misfortune of landing all three of these cases.

In the first episode of this drama, Jones placed three worthless shell companies in bankruptcy on the eve of his trials in Connecticut and Texas, successfully postponing the day of reckoning, albeit only for a period of weeks. The move was widely seen as a bad faith abuse of the court to gain litigation advantage, as Jones sought to buy off the roughly two dozen tort plaintiffs with a paltry $10 million. After the Sandy Hook lawyers and the US Trustee fought back, Jones and his lawyers beat a hasty retreat, but not for long.

They returned weeks later with a new debtor. This time Free Speech Systems, Infowars’s parent company, was on the block. According to Jones’s lawyers and proposed restructuring officer, the company was insolvent because it owed upwards of $55 million to a Nevada LLC called PQPR, which supplied FSS with the supplements Jones hawks to his millions of viewers. By sheer coincidence, PQPR forgot to bill the company for a period of years, only remembering the debt when Jones’s refusal to cooperate with discovery netted him default judgements in multiple states. Also by coincidence, PQPR is wholly owned by Jones and his parents.

The Sandy Hook plaintiffs contested the PQPR notes as fraudulent, as well as filing a suit in Texas alleging that Jones made fraudulent transfers to take as much cash out of the company as possible in preparation for the litigation. Meanwhile, Jones demands that FSS indemnify him for all damages arising from his conduct on air, leaving his personal assets — and whatever he may or may not have taken out of the company — unencumbered by the $1.5 billion debt. Judge Lopez has ruled on none of these motions, but he did boot off Jones’s original lawyers and handpicked restructuring officer, not because they’d blithely signed off on the PQPR notes, but because they’d failed to disclose conflicts to the court.

Perhaps Jones is getting nervous that Judge Lopez isn’t going to accept the indemnification agreement and/or the PQPR debt. Because he’s fought tooth and nail for years to keep his personal finances under wraps, and now, for whatever reason, it’s worth it to him to submit to the intrusive financial autopsy of a Chapter 11 filing in which an already hostile US Trustee will get to look at his books.

The petition itself doesn’t say very much. Jones claims debts exceeding $1 billion and assets of less than $10 million. The second figure may raise some eyebrows, since Jones’s salary under the supervision of the bankruptcy court is $40,000 per month, and he’s reported to have pocketed $8 million of Bitcoin from an anonymous donor earlier this year. In the fraudulent transfer litigation, the Texas plaintiffs allege that Jones personally pulled $18 million out of Infowars between 2018 and 2021 in an effort to judgment proof the company, as well as sending millions to PQPR, essentially putting it in his own pocket.

Clearly there’s cash somewhere, since Jones’s bankruptcy lawyer Vickie L. Driver is being paid half a million dollars by some entity known as “The Missouri779384 Trust.” And just as clearly, the Sandy Hook plaintiffs will go to the ends of the earth to find it.

Watching the Sandy Hook verdict live from his studio, Alex Jones makes an urgent plea to his audience for cash, and tells them that none of the money they send him will go the the families because he has filed for bankruptcy. pic.twitter.com/H658p5Sjiw

As the verdicts were read aloud in the Connecticut case, Jones mocked the plaintiffs live on air.

“Ain’t gonna be happening. Ain’t no money,” he snorted.

Guess we’re about to find out if he’s right.