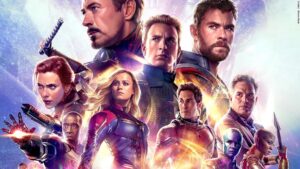 Remember movie theaters? One could be forgiven for forgetting that sitting in a dark, crowded, auditorium inhaling both stale air and stale popcorn was a welcome outing, at least pre-pandemic. Now, as the industry continues to reel from the impact of COVID-19, it can seem like the only type of movie able to rouse the masses to attend a screening at an actual theater — as opposed to waiting for the inevitable streaming platform release — is a superhero sequel or blockbuster action movie featuring one of the waning list of movie stars in a leading role. The latest test of movie theater viability will likely begin this weekend, with the upcoming release of the latest Marvel superhero installment, which according to Deadline “is expected to rain down anywhere from $150M-$200M in its first weekend.” Even if the movie is not as successful as anticipated, there is no doubt that Marvel’s ongoing decade-plus-long renaissance is one of Hollywood’s greatest recent success stories. A success supercharged by Marvel’s acquisition by Disney in 2009. Troubles with Florida’s political class aside, Disney’s masterful exploitation of Marvel’s rich catalog of characters remains one of the company’s most impressive recent accomplishments.

While Marvel’s future under Disney’s stewardship may continue to look bright, a very interesting IP dispute that hearkens back to the less heady days of Marvel’s earlier history continues to unfold in federal district courts located in New York City and Los Angeles. Each of the five pending cases involves similar facts. First, former Marvel comic writers or their heirs served termination notices pursuant to Section 304(c) of the Copyright Act on Marvel, which would allow the authors or their heirs to undo a prior transfer of copyright “beginning at the end of fifty-six years from the date copyright was originally secured.” In short, the writers or their heirs informed Marvel that they want a share of the profits generated by the characters worked on or created by those authors on a going-forward basis. Those characters include leading Marvel lights like Thor and Iron Man, as well more minor characters — but still prominent in the Marvel Cinematic Universe films and offshoot Disney+ shows — such as Black Widow and Falcon. In response, Marvel filed declaratory judgment actions against each of the noticing parties, with three filed in Manhattan, one in Brooklyn, and the remaining one filed in Los Angeles. Those actions were all initiated by Marvel in late September of last year and are just now getting past initial scheduling conferences.

In fact, the three SDNY cases were recently consolidated for pretrial purposes by Judge Kaplan. And the court in the pending EDNY case just allowed Marvel to file an amended complaint, to address a later-filed termination notice by the same declaratory judgment defendant. In California, the case appears poised to enter discovery, with trial set for June 6, 2023. Despite the minor differences in procedural posture as the cases work their way through the respective courts, the legal issues presented for adjudication are similar. As Kaplan recognized in his order consolidating the SDNY cases, each of these cases involves an “apparently dispositive ‘work-for-hire’ issue,” namely that if Marvel can show that the termination notices apply to works made for hire, the termination rights under Section 304(c) would not be applicable.

In Marvel’s view, of course, each of the works for which termination was noticed “were works made-for-hire because they were made at Marvel’s instance and expense.” Indeed, Marvel argues that because it had full creative control over the submissions made by each of the writers, along with each of the writers’ expectation that Marvel would be paying them for their work — which Marvel did at a “per-page” rate — there is no rational basis for any writer to argue that they ever possessed an ownership interest in their contributions.

In Marvel’s favor on that point is prior litigation involving a legendary Marvel artist named Jack Kirby, whose heirs had tried a similar termination notice strategy against Marvel over a decade ago. While Marvel ended up settling with those heirs before getting a decision on whether SCOTUS would hear the case, the Second Circuit decision in that case affirmed a grant of summary judgment that found that Kirby was a freelancer whose works for Marvel were works made-for-hire, irrespective of his stature as Marvel’s leading artist and commensurate level of creative input at the time the works were created. At the heart of the Second Circuit’s decision was its application of the longstanding “instance and expense” test for determining whether a work was made-for-hire; Marvel’s use of that language in its declaratory judgment complaints is thus easily understood, considering it had won on the issue in Kirby.

At the same time as their odds look long, it is not surprising that this latest batch of former Marvel writers and artists have tried their luck with the as-yet unsuccessful termination notice strategy. If they can get the “instance and expense” test thrown out or modified, or convince one or more of the district courts considering the cases now that their works were not made-for-hire, a plausible pathway would thus be created to getting an as-yet undetermined share of Marvel’s profits from Marvel’s exploitation of their characters or plot points.  To get there, they will have to convince at least one court that the early cash-strapped history of Marvel made it unlikely that it had entered into formal work-for-hire arrangements with any of the writers. Instead, the writers and heirs allege that Marvel’s relationship with one of true freelancing, with all the risk of generating the content borne by the writers themselves. And that Marvel’s own checks indicated that it was purchasing the copyright of the material it chose to buy, rather than paying for a work made-for-hire. At this point in the process, it seems like the writers need to uncover additional compelling facts in discovery, in the hopes of selling the narrative that Marvel was in no position to commission anyone to do work on its behalf. Whether these cases end up in settlement a la Kirby, or even eventually reach the Supreme Court is as yet unclear. In the meantime, however, this is definitely a copyright story worth following.

Please feel free to send comments or questions to me at [email protected] or via Twitter: @gkroub. Any topic suggestions or thoughts are most welcome.

Gaston Kroub lives in Brooklyn and is a founding partner of Kroub, Silbersher & Kolmykov PLLC, an intellectual property litigation boutique, and Markman Advisors LLC, a leading consultancy on patent issues for the investment community. Gaston’s practice focuses on intellectual property litigation and related counseling, with a strong focus on patent matters. You can reach him at [email protected] or follow him on Twitter: @gkroub.