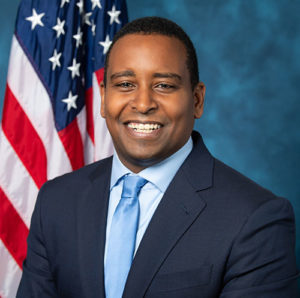 As Ernest Luning reports for the publication formerly known as the Colorado Statesman:

U.S. Rep. Joe Neguse won election to lead the House Democrats’ messaging arm, putting the Lafayette Democrat in the No. 5 elected spot on his party’s leadership team in the chamber.

Neguse was elected without opposition as chairman of the House Democratic Policy and Communications Committee, a newly created position that will make the 38-year-old the most senior member of the chamber’s leadership from the Colorado delegation in more than eight decades. [Pols emphasis]

Luning talked more with Neguse about his new title:

Neguse told Colorado Politics that he intends to pursue an aggressive legislative agenda in the upcoming Congress.

“It’s one of the many reasons why I decided to run again to serve in House leadership and to serve in this particular capacity — to be in the room as we make decisions that ultimately will impact every American, including the nearly 6 million Coloradans that live in our great state and the many others in our region,” Neguse said.

“Fighting for the American West and fighting for our state is always and will always be my North Star, and that’s something that I take very seriously, I’m hopeful that we’ll be able to continue to bring that kind of approach through this new role.”

Neguse is the highest-ranking Member of Congress from Colorado since Edward Taylor, who served as Chairman of the Appropriations Committee and Democratic Caucus Chair.

Sting Announces ‘My Songs’ Concerts In Manila Next Year