“Almost everything involves science,” according to Gary R. Skuse, a professor in the Thomas H. Gosnell School of Life Sciences and co-teacher of Honors Science and the Law: Biological, Ethical and Legal Perspectives. Throughout the course, he emphasizes how science permeates the profession of law and ends the course with a mock trial, giving students the opportunity to use scientific evidence like cell phone triangulation, medical assessments, and crash reconstruction in the context of a real case.

The mock trial has been a key project in the class since its inception around five years ago. Skuse explained the process leading up to the mock trial, saying that each year he and co-instructor Helen Syme start by picking out a real-world case that they feel is provocative or could have gone either way. They modify the names and details so the students are unable to identify the original case. The students are split into two teams, defense and prosecution, and take on roles of attorneys or expert witnesses. In the weeks leading up to the mock trial, the students use part of each class to work on the case in their groups. 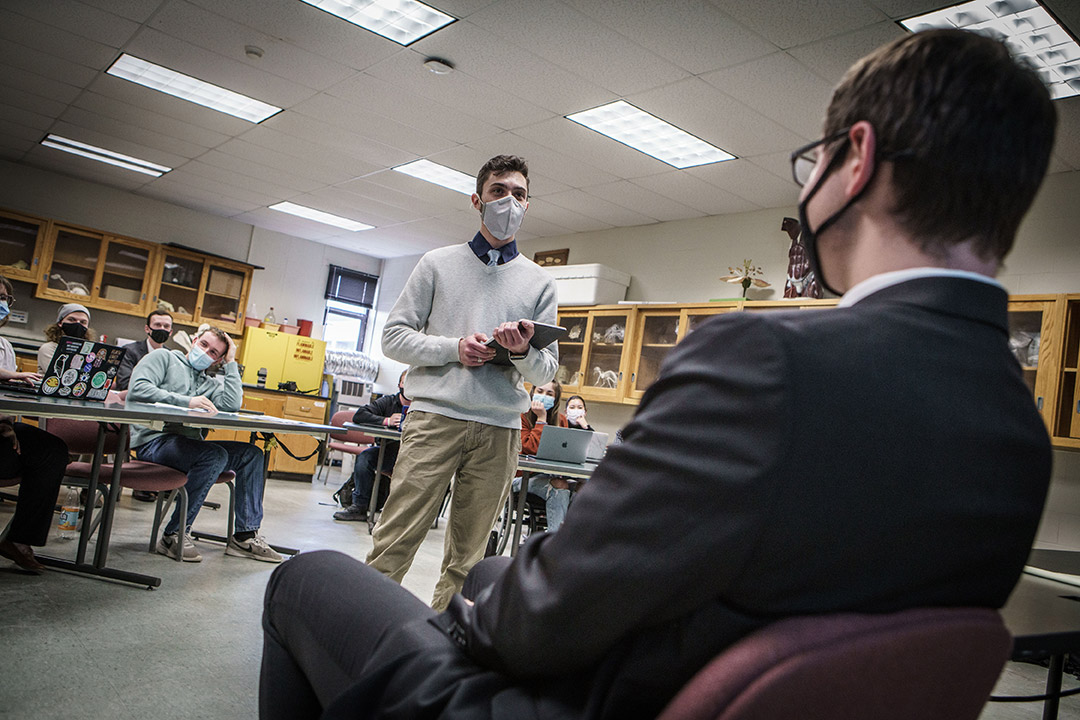 With their roles in the criminal justice system, Skuse and Syme, an adjunct faculty member in the College of Science, bring professional expertise to class discussions.

“This class with real professionals is an amazing experience to have as an undergraduate,” said Zach Eichner, a third-year student from Lexington, Ky., who majors in public policy and minors in cellular and molecular biology. He’s also part of the Accelerated 3+3 Law Program through the College of Liberal Arts and Syracuse University, and emphasized the importance of being able to understand scientific evidence as a lawyer. “I know that I’ll take the perspective I have gained from this course into law school with me next year and through my entire career.”

Skuse and Syme also incorporate their connections to other professionals in law. Having worked in the field in the Rochester area, Syme invites colleagues to act as jurors and, this year, Skuse invited Monroe County Judge Michael Dollinger to preside over the mock trial.

“I was nervous about performing a trial with an actual judge present,” said TJ Larson, a third-year game design and development major from Hamilton N.Y. “But once we got started, I enjoyed the challenge that came with it.”

The College of Science also uses this class to recruit prospective students and includes information about the class in presentations during open houses.

“There aren’t a lot of universities that have interdisciplinary courses taught by a professor and a professional from the community that accepts students enrolled from any major,” Skuse said.

As a culminating event of the class, the mock trial offers not only an opportunity for students to show off their work, but also a chance for them to have fun. They added bits of silliness into the trial, such as naming one expert witness “Officer Gary Skuse” and another “Dr. Meredith Grey” after the protagonist of the popular show Grey’s Anatomy.

The fun did not detract from the students’ ability to show their hard work, though.

“The process of tying together evidence, creating a narrative, studying the science behind data collection, and writing opening and closing statements was incredibly eye-opening and time-consuming,” said Jamie Smyth, a second-year biomedical sciences major from Warwick, N.Y. “But I honestly had fun during the mock trial, and getting to hash it out with our classmates with lots of laughter was a great experience.”